The Union is made up of the three parishes of Youghal, Castlemartyr and Ardmore.

The Collegiate Church of Saint Mary, Youghal, has been a place of Christian worship for over 1,300 years. The building of enormous historical significance is a National Monument of Ireland and is now in the care of Youghal Town Council under the terms of a unique agreement to safeguard its future. Worship is held in it each Sunday at 11.30a.m.

Saint Anne, Castlemartyr, situated on a slight rise to the north of the main street in the village, dates to the early 18th century. Services are held every Sunday at 10.00 a.m.

Saint Paul, Ardmore, is an early 19th century church, and is open in the summer months (June – August) for Sunday worship at 10.00 a.m.

Our churches are open again for public, inperson worship, up to a maximum of 50 people.  All are welcome to attend without any need to book.

You should not attend if you have any of the symptoms of Covid-19.  Please seat in the seats designated to allow for social distancing.  Face coverings should be worn, and at present there is no congregational singing.  Please use the hand sanitising facilities provided

Most Sundays we also offer online worship, which may be a short meditation or a recording of that morning’s service in St. Mary’s 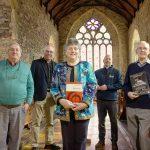 St. Mary’s Collegiate Church, Youghal which is launching the celebration of its delayed 800th anniversary by hosting a special performance of the one of the most popular pieces of classical music: GF Handel’s Messiah.

Christian worship has been offered to Almighty God on the site of St Mary’s Collegiate Church for over 1,500 years, and in the present building for 801 years.Our other churches too are steeped in Christian worship and tradition. The Churches are a physical expression, in stone and in art, of the mystery and majesty of God our creator, but the heart of the churches are worshipping communities, who gather together in the beauty of holiness. Despite the uniquely turbulent history of the Irish church.

Whether you are visiting from across the globe or just down the road, you are sure to find a warm welcome in our midst.