The Collegiate Church of Saint Mary in Youghal

The Collegiate Church of Saint Mary, nestling in a corner of Youghal’s medieval town walls, can claim to be the oldest church in Ireland with continuous worship since the 13th century.

The trusses of the stunning nave roof have been carbon dated to the late 12th century.

It’s fascinating monuments include the 17th century memorial to Richard Boyle, 1st Earl of Cork, and an older stone depicting a Viking longboat from 9th century. Associated with the church were people like Sir Walter Raleigh whose house next door can be seen from the churchyard, and Oliver Cromwell who is said to have addressed his troops from the trunk in the sanctuary. Beside the trunk is a rare example of a medieval sepulchre tomb.

Collegiate Church of Saint Mary can claim to be the oldest church in Ireland that has had continuous worship in it since the 13th century.
The presence of a church on the site itself probably dates back far earlier, perhaps even to the time of Saint Declan who founded a monastery at nearby Ardmore in the 5th century.

The stones of the building tell a fascinating story of its changes over the centuries. You can play the detective as you try to make sense of old doorways, blocked up windows, old wall lines and former roof levels. You can even find the outline of a Viking longboat carved on a stone – reminding you of the troubled history of the 9th century.

There is a 14th century font where baptisms still take place.
In the 15th century it became a Collegiate Church with the foundation alongside it of “Our Lady’s College of Yoghill” where a college of clergy and singing clerks under a Warden served the church and surrounding area. From the churchyard you can see the former Warden’s House, which was in due course owned by Sir Walter Raleigh who was Mayor of the town.

The Boyle Chapel houses the monument to Richard Boyle, the 1st Earl of Cork, who died in Youghal in 1643. There you can see Boyle, his first and second wives and his children – among them Robert Boyle, famous for “Boyle’s Law” that many a pupil had to learn at school. This magnificent monument cost him well over £1,000 – no small fortune at the time!
The stunning roof is exposed to reveal the long-hidden timber scissor trusses and some of the timbers have been carbon dated to the late 12th century. In the ancient stonework you can find medieval stonemasons’ marks which take us right back to the hands of the craftsmen who build the church. Their splendid carvings decorate doorways, windows and arches and their carved heads are a joy to search out.

In the sanctuary to the north of the altar you can see a rare example of a sepulchre tomb, a major focus for medieval piety in Holy Week, much defaced during the Reformation.

As well as Richard Boyle, and Sir Walter Raleigh, another famous name associated with the church is that of Oliver Cromwell who visited the town and is said to have preached a funeral oration to one of his officers standing on top of a trunk that can still be seen in the sanctuary.

The churchyard with interesting information points gives you access to a walk along part of the medieval town wall with stunning views across the town and the estuary. The church building is a National Monument of Ireland and, as a result of a unique agreement between the Church of Ireland and the local authority, is in the care of the Town Council while still being used for regular weekly worship by the Church of Ireland congregation. 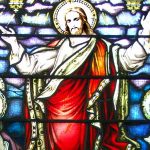 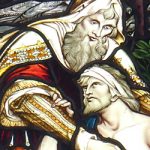 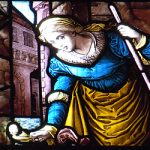